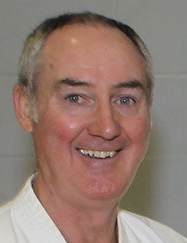 I began my Karate studies in 1975 and have always been heavily involved in one sport or another from a very early age, but two sports I had worked hard at was boxing and Rugby. I remember the Rugby season had finished and I had wanted to maintain my fitness. I’d heard a number of good things about Shotokan and thought I’d give it a try. The local clubs for me were run by the Karate Union of Scotland

I started my training under the direction of Kenny Taylor. The Chief Instructor at that time was Mr Enoeda and his assistant Mr Tomita. After several training sessions, I was totally hooked to such an extent that I gave up Rugby. Later Mr Kawasoe took over as Mr Enoeda’s assistant.

I joined the Metropolitan Police in 1981 and eventually moved my family to London, Work permitting I travelled twice a week to Earls Court to train with Mr. Kawasoe. All the above Instructors were truly inspirational in their teaching and guidance. I am good friends with Kenny and stay in touch with him.

In 1992 I started North London Karate with my Family, Darren and Lynsey assisted in teaching and Isabel dealt with all the paper work and we have gone from strength to strength. Darren is now a full-time karate instructor and has worked diligently in the development and expansion of North London.

Sadly in 2003 Mr Enoeda died which left in my opinion a great void in the Karate world. Later that year I was invited to assist in the setting up of JKA England. I resigned from JKA England in 2010 when Shotokan Karate Centres was founded.

The real turning point in my Karate studies was in 1982 whilst walking the beat as uniformed constable in the early hours of the morning in Grays Inn Road. London. When I was confronted with a very angry man who was down on his luck, he wanted to be arrested and didn’t care who he injured in the process all 6’8″ of him I felt like a wee boy and I’m 6’2″ I remember him coming at me in a rage I hit him as hard as I could, down he went. However that was not the end of it, he just shook his head like a dog and got back on his feet. You can imagine how I felt, standing in a cold and dark street in the early hours of the morning confronted by a madman, I had just hit him with my best shot and he was getting back up. I had called for back up but I knew that would not be here quick enough, unfortunately not like the movies where there is plenty of Police around I was on my own. He came at me again I knew if he laid hands on me I would be in serious trouble I hit him again and down he went. I’ll keep this story short after I had put him down a third time he appeared quite groggy and thankfully I could hear the sirens coming. We handcuffed and arrested him. True story folks. But this was a wakeup call for me. I refocused my training developing and evolving my Karate studies.

I have much to be thankful to Karate as it has saved my life more times than I care to remember, In my 32 years of service with the Police I have been attacked with just about everything. Karate does not make you invincible, but it gives you the edge, the strength of spirit, awareness and skill when the odds are stacked against you, I’ve had my fair share of injuries which I’m sure would have been far more serious were it not for my studies and training . In fact one night whilst making enquiries at an address the suspect drove a Samurai sword through the letterbox at me. I could recount a number of incidents, but the point I’m trying to get across is albeit Karate develops the mind and body as one, but diligently practiced and studied it could save your life.

Always train hard and outside your comfort zone, constant repetition in order to develop the techniques so they become as natural as breathing. Never rush your practice, breathe correctly during your practice and feel where the power is coming from. Remember Relaxation gives you speed, speed gives you power. This is what I believe

Proudest moment, there have been many in my life. From marrying my wife Isabel, the birth of my children and grandchildren. However in Karate I would say 2004 Japan Tokyo watching my son Darren and daughter Lynsey compete in the JKA world championships. 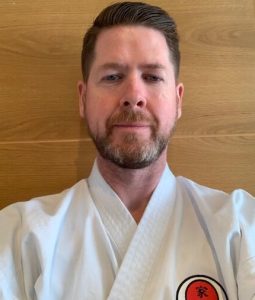 I first started karate at the age of 6, in the family dining room with my Dad teaching me Gedan Barai (downward block). I was the typical young student in the class that used to stare at the lights and wave at my parents. I floated between classes in the early years and then something just clicked, I was hooked!

I have been studying Shotokan karate for the past 36 years. It has been a great Journey. I formed North London SKC in 1992 with my Dad, we have continued to grow and develop the club over the years. During my time in the KUGB I had a very successful competition career, winning the southern regions (under 21), 2nd in the Nationals, winning the EnoedaCup Kata/Kumite at Crystal Palace, to name but a few. I am both proud and honored that I graded to Sandan under Sensei Enoeda, and to then pass my Yondan in 2003 (aged 25) just after he passed away. He truly was a great and inspiring man.

After the passing of Sensei Enoeda, JKA England was formed. I had the opportunity to train under some of the top karateka in the world, Sensei Osaka, Tanaka, Naka the list goes on. I competed in kata and Kumite for JKA England, travelling around Europe competing in friendly internationals to European and world championships. This was a great time in my karate life; many friendships were made with some great training along the way.

It was during this time I started to look at the other side of karate and started studying karate to improve my knowledge. I qualified as an Instructor, Referee and Examiner under the JKA, this was through sitting various exams at European courses and at the JKA Honbu in Japan. Sadly, I had to resign from JKA England in 2010.

I, alongside the other directors, set up SKC England in 2010.Sadly Sensei Mark is no longer with us. This was a great challenge as there is quite an age gap between the directors, with me as the youngest. But we sat as equals and thrashed out ideas and values that we wanted to instill into SKCE. I was also involved in the early development of the SKCE Squad, later that year we competed at the SKDUN Worlds in France, I achieved 3rd Place in the men’s Kumite. I enjoyed 9 years working with SKCE helping to develop and improve the standard of karate. Unfortunately, the direction of the organization changed in 2019 and we had a regional split. I had no choice but to resign, along with several other instructors.

Karate has always felt like family to me, hence the start of my new path. We formed Kazoku Karate England (family). My roots have always been training with Japanese instructors, so we are affiliated with Sensei Kawasoe’s group. Our aim is to grow and develop the Kazoku Group raising the standard and reaching new heights, keeping the politics of karate at the door. I relish this challenge and I’m looking forwards to a bright future.

When I see 2 out of 3 of my boys turn up to my class to train – one wearing a black belt and the other a brown – I couldn’t be more proud. And the youngest is just practicing GedanBarai in the family dining room for now. But I’m sure it won’t be too long before he follows in his big brothersfootsteps.

Karate is not about what you have achieved in the past, but the legacy you pass on to future generations. 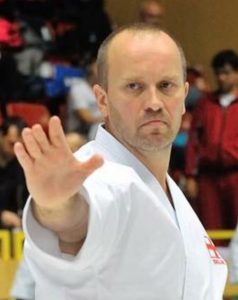 I began training in Martial Arts in 1973 at the age of 8. It was after the death of Bruce Lee when the Arts became very popular and I started in Judo as I was too young to join a Karate or Kung Fu club at that time. These clubs had age restrictions as the techniques were deemed too dangerous and aggressive for anyone under the age of 18.

After a few years the boom had settled down and the Judo club folded. By now the age restrictions in the other styles had relaxed and as I approached my teens, my curiosity of these other styles prevailed. I went to the local sports centre to watch a Karate lesson and I was amazed at what I saw. I was captivated by the skill, discipline, control, spirit and humble of all the students training. The instructor was incredible and I joined the following lesson.

Since then I have trained under many great Japanese Masters including Enoeda, Tanaka,Yahara, Osaka, Abe, Naka and Kawasoe Sensei’s just to name a few…there have been many more! I have competed in Regional, National and International competitions with modest success winning 3 National titles in Individual Kumite and Team Kata and trained with the England Squad on a number of occasions.

I am currently at 6th Dan level having taken my grading in November 2017. I am a qualified Judge and Referee, First Aid qualified and have DBS clearance. I am qualified to work with people who have disabilities. I have taught Karate since gaining my Black Belt in 1992 under the Japan Karate Association grading examiners with many of my students attaining Black Belt level themselves. The highlight of my time in Martial Arts is seeing my students achieve their goals…from a 4 year old child passing their first grading to more advanced students reaching Dan grade levels. My eldest son passed his Black Belt grading in 2005 aged 13. My two youngest sons are starting to realise the great benefits that Karate has to offer with discipline and achievements. They are doing very well at school.

My daughter started training in 2004 aged 7. She is currently at 3rd Dan level and is busy on the competition circuit. She has won many tournaments and is multi National, European and World Champion within different Organisations. I am very proud of my children.

The benefits of Karate are endless, especially for children starting out in life. It equips them with the tools they need to succeed. Karate is not just “another activity”. It is a way of life if performed in a regular and serious manner and I believe it to be an invaluable opposition to today’s violent bullying and knife culture. There are many philosophies within the Martial Arts. One of my favourites is “If your temper rises, lower your fists. If your fists rise, lower your temper”.